Anna Lee and the Lucky SO and SOs 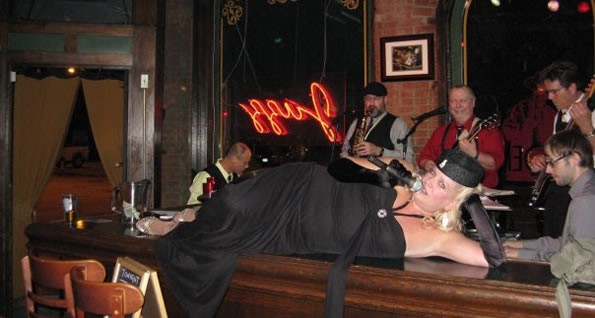 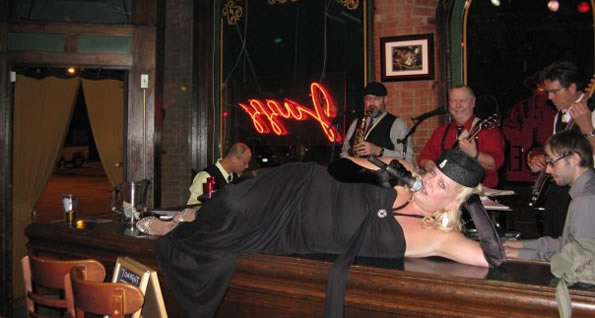 ANNA LEE AND THE LUCKY SO AND SOS

Anna Lee & The Lucky So and Sos have been playing dance music in the Kansas City region for over ten years. Recently, they have been performing almost every weekend in the Power and Light District and The Plaza. They can also be seen at the Zona Rosa during their summer music series, and at private functions all over the metropolitan Kansas City area.
The make-up of Anna Lee and the Lucky So and Sos draws from a diverse mix of musicians. Every member brings varied experiences and talents from years of performing in every venue imaginable—from opera houses to roadhouses.

The players:
AnnaLee:
The “Diva” of the band is AnnaLee. She brings a serious set of pipes to the table and delights in leading her Lucky So and Sos through a night of jump and jive. AnnaLee traversed the country for several years doing musical theater and finally found a home, and a band that loves her, in the City of Fountains.

Bill Irvine:
Bill Irvine, a home-grown Kansas Citian and The Lucky So and Sos’ guitarist and leader, has been on the KC music scene since the 70s with such bands as Sirius, Plain Jane, and most recently the Doghouse Band.

Steven Smith:
Another local is reed man and violinist Steven Smith. Steven brings an eclectic background to the band, with experience ranging from R & B and Salsa to Polka and Classical. A classically-trained orchestra conductor, Steven is also the arranger for the group.

Byron Jones:
Byron Jones is one of the foremost trumpeters on the music scene in Kansas City. Byron has recorded with: Johnny Isom and the Receders, and The Bobby Carson Band. Additionally, Byron has been the trumpetista for Son Venezuela since 1996. He has established himself as a major player in the Kansas City and brings the “sizzle” to the Lucky So and Sos.

Eric Griffin:
Holding down the 88s is Eric Griffin. Eric has been performing for 31 years. He graduated with a music education degree from Missouri State University, and a master’s degree in music education from Kansas University. Eric has taught band for the last 15 years in public schools. Besides performing in the KC area with the Lucky So and Sos and other groups, Eric is a frequent composer of commercial music, with several radio broadcast credits to his name.

David Brewer:
Dave Brewer has been playing bass since before he was born, which made it quite uncomfortable for his mother.
He currently holds about 98.6 degrees and likes puppies and thunderstorms. He is looking forward to meeting.

Dan Smith:
Dan Smith is a Kansas City drummer who has performed professionally since forming Riverrock in 1974, the year he joined the Kansas City Federation of Musicians, Local 34-627. As a member of that band, Dan has performed thousands of shows and shared the stage with dozens of internationally known recording artists, like Alabama, Charlie Daniels, Jerry Lee Lewis, Minnie Pearl, Frank Sinatra, Jr. and Hank Williams, Jr. Riverrock has recorded four albums and they were inducted into the Kansas Music Hall of Fame in 2011. Dan also plays drums for Neon Blue and began playing with the Lucky So and Sos in 2015, joining his brother, sax man Steven Smith. Dan’s “day job” is as a recording engineer and talent agent.

Demo Anna Lee and the Lucky SO and SOs: