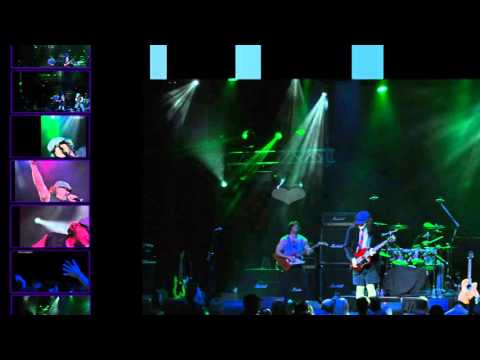 KC/DC! The region’s only band exclusively playing both the Bon Scott and Brian Johnson eras of AC/DC. No other band in the history of rock ‘n’ roll has created better music to party your ass off to than AC/DC. We’re actually jealous of you if you come to one of our shows…yes JEALOUS!!! We wish we were sitting out front listening to these ass-kicking rock anthems and drinking too much right-alongside you…because we ourselves are just big fans of this music and what it represents–HAVING FUN WITH YOUR FRIENDS! (But playing these tunes ain’t too bad either, so don’t feel sorry for us!). KC/DC is one of the top AC/DC tribute bands in the world. Featuring dedicated vocalists covering both the Bon Scott and Brian Johnson eras and the only AC/DC tribute band around with a bagpiper! This is HIGH ENERGY stadium rock that will leave you Thunder stuck! There’s not a single “Debbie Downer” moment in any of the tunes we play. We do not wish to “inform” anyone of any issues (other than the fact that you need to loosen up and have some damn fun!), no songs to make you “think”, no songs to express our “inner-rage”, no songs to relate to the “lowest common denominator” of society, no political views. Just good-old blues based boogie-woogie hard rock ‘n’ roll that you can dance to, drink to, fight to, drive fast to, scream-along to, and just plain to live.